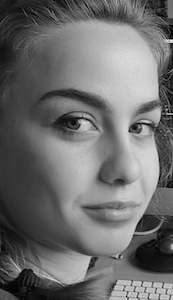 Silvia was born in Milan, Italy.
Since she was a child, she had a passion for motion pictures.
Once terminated high-school, in 2011, she decided to attend the School of Cinema in Milan and she get specialized in shooting and cinematography, in which she graduated in 2014.
Immediatly after, she started working in a post-facility in Milan, as assistant colorist, where she grew up as colorist.
She had to work on different projects: commercials, music videos, feature films from important Italian directors and cinematographers and digital restoration. She learned to work on different software and hardware: not just for color grading, but also for digial restoration and stereoscopic depth grading.
In late 2016, she decided to become a freelance digital colorist and focus on color grading in Davinci Resolve.
She is based in Milan.

Audi – Sum of our experience

Fico – To the fire and Beyond

Drop us a line